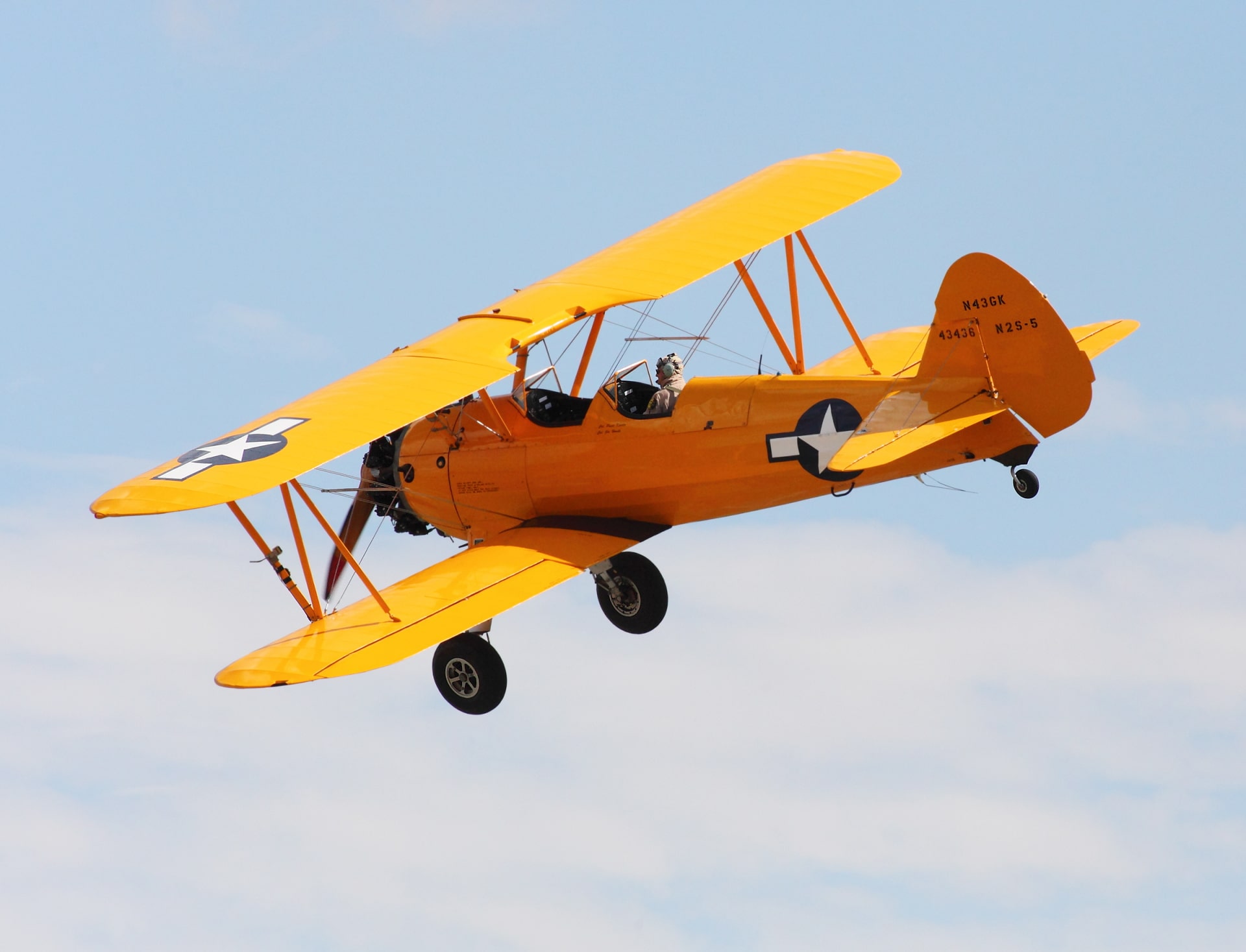 What is Adverse Yaw and how does it work?

Adverse yaw, when the nose wanders without your permission.

If you’re a pilot of light planes, even with low experience, you should have noticed that when you’re trying to turn into a certain direction the nose of the airplane tries to go towards the other side. Your instructor has been hitting hard on you to convince you to use that “inside rudder” to make the ball stay in the center, but this first phenomenon that happens when you start your lateral motion of your stick or yoke, is not quite about coordinated turns….it shows up before you need to coordinate your turn. 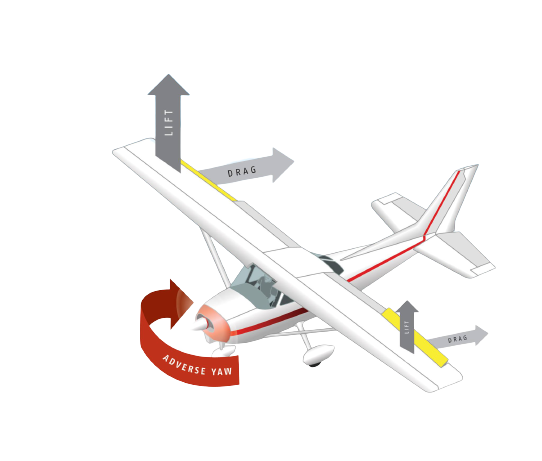 As you know the airplane rolls because it has more lift on one wing and less on the other. The wing with more lift raises and the one with less wing, hopefully, at that point goes down.
Ok, I know that this might sound a bit too basic for my followers, but bear with me, for a while….

The aileron that goes down, raises its own wing and creates more lift and consequently more drag; that means that, beside rising, the wing on which it’s installed, will go back. So, at this point, still hoping that your plane moves all in one piece, the rest of the fuselage, tail, nose, landing gear will follow this tendency.

The quantity of rudder you apply during this dynamic moment of your turn entry might be significantly more important than the one that you will need to apply later on, during the phase of coordination of your stabilized turn.

What I mean is that the sideslip that you’re generating by deflecting ailerons will be very evident and much more important than the one that you will have to compensate for while you are already stabilized in a turn, with neutral (or around there ) aileron deflection and your plane set into a circle.
It’s noticeable that your nose, while entering a left turn for example, will go way more right, than what the sideslip will be during the actual turn.

Now, do you really like this behaviour? I mean, most of us, maybe all of us, are used to compensate with rudder for what the nose wants to do while turning, but is it really something that the pilot is sentenced to do for life? Or could the design of the airplane be a bit of help?

Now, the need to kick in a bit of rudder during your turn entry is not something that will bother you to death( even if I showed many of the guys who flew with me that several uncoordinated turn reversals at slow speed might put you into a spin, due to excessive adverse yaw..), but what makes it so unpleasant in some airplanes and not in others?

I will talk about “rubbing the planes” in a latter article, but I’ll give you a bit of introduction to this concept right now. What you should do first when you test an airplane (maybe because you want to buy it) is to touch it, rub it. Yes, you go there, and you look at the shape of the fuselage, if it’s rounded, squared or elliptical in its section; you look how long is its nose in front of the wing, how back or forth is the landing gear installed and things like this. Believe me, you can learn a bunch of important stuff on how the plane flies just only by “rubbing it” on the ground.

Now there are things that will tell you exactly how adverse yaw will look on your plane when you look at it.

1. Wide wingspan+ short fuselage. We always look for performance. We always look to go fast or terribly slow to land on a mountain strip (yes, I admit it, I’m one of those folks…). The designer that wants to give us a lower and lower speed, will make the wing bigger. Meaning more span or more chord or both of them. Most of us, together with the builders, will not care too much of flying qualities of the plane, because we’ve never asked for them! We never asked to a plane constructor “How easy is your baby to land short?”. We just asked “How short will it land?”. And he’s right, he’s giving you an airplane that lands short, slow and that will land on his side and capsize if you don’t put in enough inside rudder when sideslip has developped in your base turn! If the wing is “too long” and it’s attached to a fuselage that is “too short” it will give you a lot of adverse yaw entering into a turn. A glider is the perfect example of a huge difference between “wing-and-fuselage-length”. Thanks to Maurizio Menegotto soaring instructor at Aeroclub Adele Orsi, In Calcinate del Pesce, Italy, for this perfect demo!

2. The hinging of the aileron. This is a much more complex topic to discuss. Here I’m presenting just the basic concept. There are different ways to hinge the ailerons to a wing. If you hinge them at their leading edge, they will purely move down and up. They will simply create lift and drag as they are. So, in that left turn, the left aileron will go up and the right will go down. The right will generate more drag and the right wing will start pulling back. Now what if you hinge the ailerons a little bit down into their chord length, for example? In an asymmetric profile a bit of the leading edge of the rising aileron will protrude through the lower plane of air layer, generating a bit of drag that will prevent a wider adverse yaw do develop. In our example, the left aileron will do that. 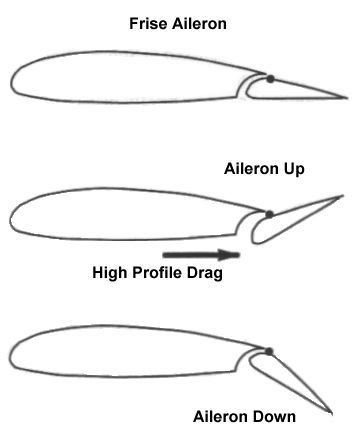 3. Floating Rudder: Now, another thing that we ask for (and we are terribly wrong) when we chat between pilots and designers is to have light control forces. Again, I’m not going to expand too much the negative effects of light force gradients in control deflections, but the rudder is always at the center of attention when we talk of control stiffness. Rudders are generally large surfaces, that are way behind the plane and way into the wake of the propellers (pulling or pushing ones); the “natural levers” and force reduction gearing along chain of control of the rudder, are very difficult to be installed. The directional chain of control is so linearly built from their inceptors ( the pedals), that is kind of hard to work on it to reduce forces, should they be too heavy.

So, most of the designers tend to use aerodynamic compensation. A big rudder with a “horn” protruding in front of the hinging line of the rudder itself, for example. This, during rudder deflection will strongly reduce forces fed back to the pedals; but what if I leave the rudder alone, no feet on the pedals? It happens that, while I’m turning with my longer-than-fusolage wing, that maybe has ailerons hinged on their leading edge that give symmetrical excursion…… the rudder floats! Yes, the displacement of the pedals, in that case, will be “automatic”! We are in a sideslip due to our turn and the rudder, with that big horn in front, will align itself to the airflow, thus reducing the so called “static directional stability”. It’s like a door slamming for a sudden wind gust! A vertical fin, should mainly take the tail back to be aligned with relative wind, but if you couple it with a huge movable rudder surface ( and maybe you sacrifice fixed surface for bigger movable surface) the vertical fin will become “transparent” and the rudder will take control of your sideslip angle.

In that case the rudder likes to stay there and will remain there in a sideslip with yourself and your plane. The proof of this tendency is fed back to your feet, with no forces in contrast with your pushing action. 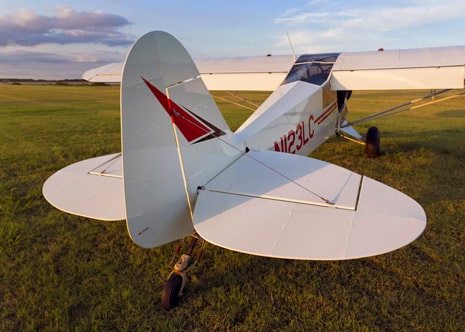 The tendency to have extremely light control forces, as we said before, is often present on light planes, especially on rudder pedals. This phenomenon, if present only on the rudder, is generally not dangerous, but it is a very annoying characteristic and makes flying the plane more difficult. Your butt will feel it as a strange and disorienting feeling…he will not like it ;).

So, why continuing to insist in the search for light forces gradients on controls if flying becomes so unpleasant and non-natural? I leave the answer to the builders and designers!

On the other side, beware of light forces on the longitudinal chain of control. That might be a very dangerous symptom of high instability of your aircraft and is not going to be just a matter on bad flying qualities; it might erode your safety margins. More on this in the future.